Li Jiancheng: the Youngest Luojia Pioneer in the Field of Surveying and Mapping

At 31 years of age, Li Jiancheng was promoted to the position of Professor. At 32 years of age he received funding from the National Outstanding Youth Fund and was selected among the mapping system cross century academic leaders. At 33, he was selected among the national talents in engineering, winning the sixth Chinese Youth Science and Technology Award a year later. The same year he was nominated among the national outstanding young experts. By the age of 35 he had already won the Hubei province first five young scholars distinction a few times. He also won the second prize in the National Scientific and Technological Progress competition. At the age of 46, Li Jiancheng was elected a fellow of the Chinese Academy of Engineering, becoming the youngest academician the national field of Surveying and Mapping has ever had. 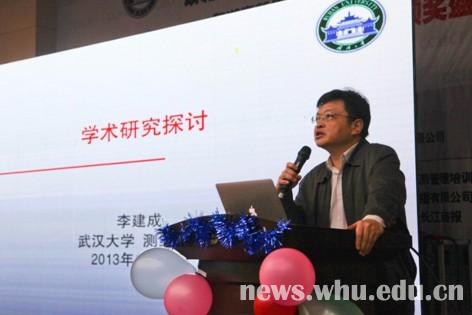 This honor recognizes his steady, dedicated work in the field of Surveying and Mapping.

It is necessary to note that back in 1987, the year after graduating his Bachelor studies, Li Jiancheng began studying under Professor Wang Kunjie. Mr Li Jiancheng received his master's degree in 1990. This accomplishment set him on the track of studying the earth's gravity field and further doctoral studies. The determined and dedicated manner, in which Li Jiancheng worked, made him famous amongst the scholars in this field.

The Fruits of Innovation

Together with professors Ning Jinsheng, Chao Dingbo, Wang Kunjie and other scholars, Li Jiancheng is committed to using modern theory and technology for a unified national "precise geoid".

This is a professional jargon. Let us listen to Prof. Ningjin's explanation: "we don’t have a unified geoid. Due to this fact we are unable to correctly measure the altitude. In order to determine an initial surface, we assume that the sea level is a stationary surface, this surface is the geoid." If there is a precise national geoid, many problems in the field of surveying will become simpler and this will save time and money. Through unremitting exploration, the precision national standards for land surface to 0.3 meters put forward by Li Jiancheng, met China's 1:50000 topography mapping requirements. These standards won him two prizes for national scientific and technological progress.

Previously, the standards in China estimated the geoid hovering imprecisely between around 3 to 6 metres. Li Jiancheng says this was unacceptable as today’s science and technology means we are in "the century of centimetre level precision" and in fact, in some cities we have advanced to the millimetre level precision.

An evaluation report of his research, put out by the industry experts notes that "Li Jiancheng brought the main development research and application of geoid in the Chinese Surface Engineering, to solve a number of theoretical and technical problems of precise regional geoid determination, completing the leap from meter to decimetre to centimetre level, then, the sub centimetre accuracy." This achievement has a huge scale of application in our country. There are more than 100 provinces and cities regional geoid projects currently running. Accuracy in the determination of the geoid has huge social and economic benefits, especially since the rate of constructions in China sees no immediate slow down.

"Only GPS satellite receivers and the national geoid can directly measure the altitude according to the needs of various types of construction projects. This was unthinkable in the past." Prof. Ningjin said.

"During the times of my studies, many teachers considered me as a person. Their words and deeds benefit me all my life," Li Jiancheng kindly remembers. The older generation of Surveying and Mapping Scientists started as his mentors and later became his research companions. This relationship forged profound friendships.

The innovation is at the heart of Li Jiancheng scientific career.

Li Jiancheng is a dedicated person. Everyone who knows him is impressed by the fact. His dedication to professionalism emerges from the start of a conversation. When Li Jiancheng chose 21 years ago to calculate an accurate "geoid" for China, this endeavour did not create a fuss. It was just an ordinary professional terms of Surveying and Mapping, something that’s in the book, so to speak. No one showed any interest in it, because there were no immediate economic benefits emerging from this study at the time. The state did not take it seriously. But the decision turned out to be right long term, as the Chinese opening to the world, together with the economic development, accelerated rate of construction and emerging new industries created a demand for this level of accuracy.

Although after many years, Li Jiancheng's old friend and colleague Professor Yan Li still remembers the night Li Jiancheng knocked at his door, and very excited announced his first breakthrough. "He had spent nearly 30000 dollars to buy a computer that is he tried various devices to save money and still do the job." Yan Li recalls.

Prof. Li Jiancheng spent most of that summer at the office, in front of the computer. Perspiration came down like raindrops. "From his determination, we knew this guy will succeed in the end," a former classmate, which has later become a partner in his team, recalls.

Li Jiancheng may be strict in demanding positive outcomes, but when it comes to academic exchange, he never interrupts others and always listens what the others have to say. "It is this respect in what concerns the academic practices that lead to the formation of a cohesive academic team and a good learning atmosphere," Professor Zhang Xiaohong noted.

"You can always find him in the office, even 11 at night," former student and currently young teacher Zou Xiancai points out. "His achievements in scientific research exist because of this perseverance spirit, constant effort. Professor Li is consistent from beginning to end. He often stays up late to work overtime, sacrificing a weekend with his family to get the work done. Even during a short trip, such as in the car, plane, he will not easily let go an idea that’s bothering him. Often, while travelling by car you see him deriving some formula. He says this is his hobby."

His persistence is a mark of the passion he has for this field of studies.

"I am in excellent terms with Professor Li for nearly 20 years. He has great influence on my personality and career development," Ning Jinsheng talks about his mentor, Li Jiancheng, filled with gratitude and admiration. Professor Li is genuinely concerned about his students' lives. The academic requirements are very strict yet his personality is very kind. The two aspects work together, not contrary to each other as some would expect.

The need for studies abroad is also recognized and each semester Professor Li sends his students to participate in oral English training classes, to be able to write letters of recommendation and pass the necessary exams needed when going abroad. Professor Li Jiancheng grants his students whatever is requested.

"When it comes to science, he is very strict, and even can be described as difficult. He often says: details decide success or failure." Li Jiancheng's pupil, young teacher Jin Tao Yong revealed. He confesses a time when Li Jiancheng asked his students to calculate certain measurements. The students were happy to report: "accuracy 1.5 mm!" A bit grumpy, Professor Li asked the students to "strive for 1.4 mm!" He would spend time with the students in front of the computer, trying to make a line of code more beautiful. Even a small space is not neglected.

This obsessive attention to detail might seem amusing at the first glance nevertheless it is something required when doing high quality work. These results affect many people.

Ten years passed since Li Jiancheng became the dean of the SGG (School of Geodesy and Geomatics. "I am a soldier, a lifetime on the battlefield of an exact science. I hope I have many more years ahead in this struggle so that I may contribute to the progress of the society even more," Professor Li said.